This week’s “Wine and Film, A Perfect Pairing” podcast on reVolver Podcasts, we discuss two big films, one great the other not to much, and pair with big wines, and thankfully both are great. First up, the remake of “Ben Hur” paired with interesting, elegant and delicious wines Israeli wines from Golan Heights Winery. Sadly, even with a great chariot race the film didn’t reach the greatness their hundred million dollar budget may have hoped for, but the wines far exceed expectations. More on both the film, including Gary’s review, and the wines below.

And, listen to our podcast here, just click “Episode 9,” or subscribe through iTunes or Google Play Music. 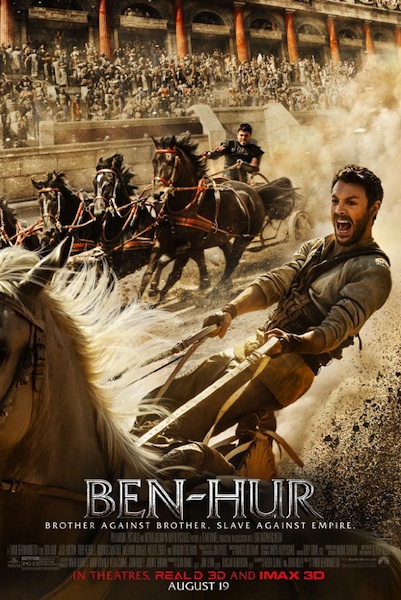 The remake of the 1959 classic, “Ben-Hur” lacks subtlety at every turn. It’s a modern day mash-up of computer generated horses and chariots, an unusual amount of forced dialogue, and for the first few minutes resembles a sand and sandal TV movie of the week. These are not compliments.

Yet, the film has merits, including an intense sequence below a galley ship filled with chained together slaves with a buff and weary Judah Ben-Hur inspiring those around him to stay alive. It’s a violent “ramming speed” sequence that works in a 2016 cinematic context, perking up the dialogue challenged audience and forcing them to take seriously what is happening inside the story.

And yes, the chariot race is another example of the “Fast & Furious” way of making films. Things that defy gravity and can’t happen in real life can happen in movies. Horses and humans are trampled, Ben-Hur somehow pulls himself up and gets back on the chariot, and the blood thirsty cut-a-way crowd of extras wants more.

And then there’s Morgan Freeman, who shows up half way through the film as a short breath of fresh air.

Here’s my point. “Ben-Hur” acts like a film that can’t wait to get all of the meaningful moments out of the way so it can get to the carnage.  One problem. The carnage only works in partnership with the screenplay, one holding up the other, but it feels forced and alone in this heavy-handed re-make.

Jack Huston, Toby Kebbell,  Nazanin Boniadi, are fine actors doing their best with what they are given, a compromised screenplay by Keith R. Clark and John Ridley that seems desperate to be all things to all people. Is this a Hollywood action film, a faith based movie, a biblical epic? The answer is yes to all three without playing fair with each other.

Director, Timur Bekmambetov, the visionary Russian-Kazakh director of “Nightwatch” and “Wanted” is capable, but he’s also the director of the ridiculous, “Abraham Lincoln: Vampire Hunter.” His latest dumbs down to the audience.

Don’t even get me started on why this film needs to be in 3D, and the absurd pop song sung during the closing credits. On it’s own, it’s fine, but in the context of “Ben-Hur” it feels like forced marketing.

The more I think about “Ben-Hur” the worse it gets.

Though fictional, his film had many biblical references to Jesus and his teachings, so it seemed appropriate to not only recognize one of the growing wine regions in the world, but also one that Jesus spent much of his time in, Galilee, Israel. As noted throughout the New Testament of the Bible, some of Jesus’ most significant ministries happened in and around Galilee, specifically  the Sea of Galilee including two dramatic miracles that were done on the Sea when He stilled the storm (Luke 8:22–25) and walked on the water (Mark 6:47–52).

One of the oldest wine regions in the world, Galilee is one place in Israel enjoys ideal conditions, as in Bordeaux or Tuscany, for producing renowned wines, often from well known international varieties. With perfect terroir, the combination of sun, slope, soil, temperature, etc.

The most well known brand in the US from Golan Heights is probably their “Yarden” producing robust Cabernet, Syrah and Merlot based wines. Their volcanic plateau vineyards rise from 1,300 feet above sea level to 3,900 feet, which sees a great diurnal shift from hot days to cool nights, keeping acidity/freshness there even with big, fruit forward, higher alcohol wines (typically around 14-15%)