Part two of this week’s “Wine and Film, A Perfect Pairing” podcast on reVolver Podcasts Gary and I pair an off key, yet always charming Meryl Streep with one of the most perfect bubbly wines in the world. Both are thoughtful, thought provoking and filled with wonder and amusement. And both of our leading ladies faced tragedy and heart ache in their lives, yet didn’t let it keep them down. For “Florence Foster Jenkins” a perfect pairing of Veuve Clicquot La Grande Dame Brut Rose.

To hear out full podcast click here, and listen to “Episode 8” or subscribe for free through iTunes. Our pairings and reviews below.
And get ready, because this Friday we take you on a wild ride through West Texas with “Hell or High Water,” and it is awesome! 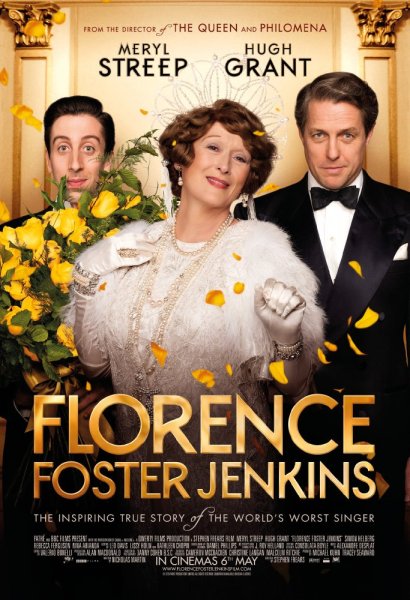 The only thing off-key about “Florence Foster Jenkins” is her own voice, since the rest of the film is a charming, melancholy look back at a woman of means with a mysterious past and a heart to perform. Looks are also deceiving in this little cinematic charmer, because on the surface it feels like a simple premise, but it takes talent and a fine director to pull it off.

Florence Foster Jenkins was a real-life philanthropist who loved Opera and became well known in New York social circles for supporting the arts. She also loved to sing and couldn’t hit a note, but that didn’t stop her, or those close to her, from helping pursue her dream of giving a musical recital at Carnegie Hall, as well as making a recording. She did both in the 1940’s and the movie appears to be an accurate account of what happened.

Meryl Streep, the most Oscar-nominated actress in history with 19, takes on the title role and God bless her, sings so stunningly off key you can’t stop giggling. By the time she gets to Carnegie Hall you have grown accustomed to her vocal failings and it doesn’t matter, it’s still funny. But, in Streep’s hands, it’s also heartbreakingly human knowing this woman lived a lie both on and off the stage.

Hugh Grant is terrific as her wandering husband who also pays off critics for good reviews, and there is a sadness about his choices in life as well as hers. But, the real find here is Simon Helberg as Cosme McMoon, as her piano accompanist. Much of the film is seen through his eyes, and there is a good chance when you watch this film and wince, Cosme is doing the same thing.

British director Stephen Frears (The Queen, Philomena) often makes movies of style and substance without judging his subject. His latest embraces Florence Foster Jenkins warts and all, and it’s a refreshing experience, because there is much to like about this lady. She gets things done.

It makes me think, if I were sitting in the audience at Carnegie Hall back in 1944, I probably would have played along and stood and cheered.

With Florence, there was a certain sadness and sweetness to this film, so beautifully depicted by Meryl Streep. But, for the society girl who did so much for so many others, mainly because of her love of the arts and love of music, a celebrated Champagne that will make you forget that Florence sings off key.

As she made a name for herself in the highest circles, the Grande Dame of Champagne, Veuve Clicquot’s Prestige Cuvée, La Grande Dame Brut Rose, paying homage to a very “Grande Dame de la Champagne,” Madame Clicquot. The incomparable finesse of this cuvée results from a blend of eight of the House’s traditional Grands Crus.

In 1810, the house took the name Veuve Clicquot Ponsardin. The way that she ran her company, from risky overseas ventures to startling technological innovations, changed Champagne forever. Her motto is still the guiding principle of our company – “Only one quality – the finest.”

The celebrated La Grande Dame Brut Rose is currently on the 2006 vintage. Filled with delicate flavors of white raspberry, toast, candied ginger for a vibrant, lively and delicious Rosé Champagne.