“Lady Bird” is the type of film that lingers long after it’s over while challenging you to remember what high school was really like rather than what your clouded, romanticized, memory might recall.

It’s a thoughtful, emotionally complicated film starring Saoirse Ronan (Brooklyn, Atonement, Hanna) as the outspoken title character growing up on the wrong side of the tracks and attending a private Catholic High School in Sacramento, California.

At first glance their relationship appears unhealthy, which explains most of the bad choices made by, “Lady Bird,” but like all well-written films about real life, there is an endearing quality to messy parents who raise messy children. Ultimately a sense of forgiveness is needed to move forward making the final 30 minutes of this film as satisfying as any I have seen all year.

I have admired Gerwig’s quirky honesty as an actress, but as a writer and director, she has proven to be a significant, elevated new voice in film that understands what happens on both sides of the lens.

There is a lovely cinematic tone to “Lady Bird” that demands you pay attention and find some sense of respect for every single character portrayed on screen, with not a cliche in the bunch. Much like, “Juno,” this young woman has chosen to put a lot on her plate and in the end, assumes full responsibility.

“Lady Bird” is rated R for honest language and adult situations and runs a quick 93 minutes. It’s also a wake-up call to overwhelmed parents with teenagers who may or may not be on the verge of trouble.

Beautiful films are not always attractive on the surface, but after spending just over an hour and a half in Sacramento with a sharp-tongued teenager and her even sharper-tongued mom, I felt like I got to know the city and some of its people.
Put “Lady Bird” on your must-see list.

Much like our leading lady, “Lady Bird” who wanted to get away from her home, then to be drawn to everything that made it her own, Stoller Family Estate Winemaker, Willamette Valley native, Melissa Burr, did not want to stay in her hometown or become a winemaker. But understanding the grape became a passion, drawing her into the craft of her now famous her home region. When she was offered the position to be the first dedicated winemaker for Stoller Vineyards in Willamette’s Dundee Hills, she jumped on board. That was 2003. Today her highly regarded Pinot Noir shines with layers of fresh roses, woody herbs, and spice, balanced with wild strawberry, cherry, and pomegranate. Stoller Dundee Hills Pinot Noir is available for $30. 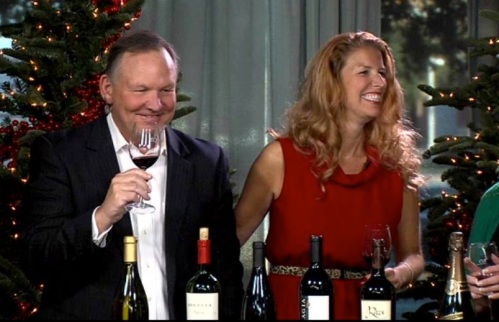 For more Wine & Film pairings, toasting the best of 2017, please join us Monday, December 11 for a “Best of the Year” Wine and Film event with The Dallas Arboretum & Botanical Gardens, with proceeds benefiting The Arboretum. Details here.

We hope to see you there!