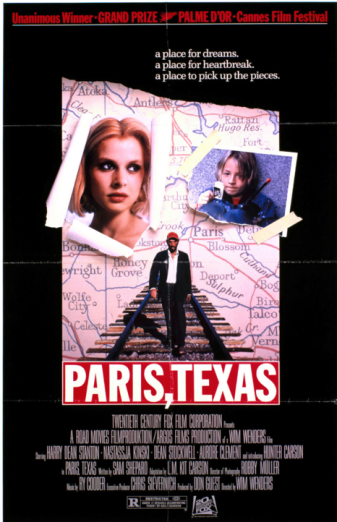 Harry Dean Stanton was best man at Jack Nicholson’s wedding and that should tell you a lot about the complicated character actor who died earlier this week of natural causes at the age of 91.

As a movie going child I remember his face in, “Pork Chop Hill,” with Gregory Peck and opposite Eli Wallach in 1962’s Cinerama version of, “How The West Was Won.” An epic western I saw ten times.

He played a soft spoken dad in “Pretty In Pink,” and “Red Dawn,” and came into his own in playing a broken, tortured soul in Wim Wenders’ masterpiece, “Paris, Texas.” His melancholy performance in the Sam Shepard screenplay still reasonates in my head.

When I saw Harry Dean Stanton search for a missing cat in, “Alien,” I knew his character wasn’t long for the world as he whispered,
“Here kitty kitty kitty,” and he was terrific and odd as the peculiar repo man in, “Repo Man,” produced by former Dallas resident and Monkees band member, Michael Nesmith.

“Godfather II,” “Cool Hand Luke,” “Escape To New York,” the films and appearance are endless including a funny little part as a poetry reading beatnik in a Danny Kay film called, “The Man From The Diner’s Club” in 1963.

I had multiple discussions on and off camera with Harry Dean Stanton over the years including a two hour chat at a famous bar in Los Angeles one night before he wandered off after hours to play with a band. That night he was generous in conversation wandering seamlessly between music, women, and weed.

Harry was not a dandy and had no time for playing dress up. He was always in the same dark suit jacket that appeared to be last laundered in the 1970’s and that’s what made him special.

He was famous but never acted famous. He was genuinely soft spoken and as eccentric as anyone I have ever met. He had little or no small talk but had a lot on his mind, and felt more comfortable surrounded by Hunter S. Thompson or Jack Nicholson types than socialites.

As an actor his work seemed effortless, and if you know anything about the art of acting you’ll know that’s a rare gift.

I liked being around Harry Dean Stanton because I knew the time we spent together back stage at film festivals or in a more formal television setting was time extremely well spent.

An odd, rare bird indeed, and a genius of an actor.