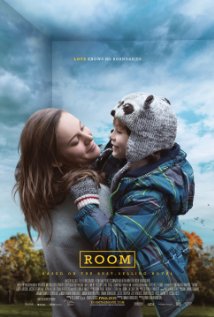 “Room” is a special film that begins with a five year olds birthday party. One problem, the only people attending are the birthday boy and his mother, because they are both locked away in an isolated garden shed by a deranged male predator. Brie Larson ( Trainwreck, 21 Jump Street) is good enough to win the Oscar playing, “Ma,” a young woman kidnapped 7 years before, and yes,  the kidnapper is the boys father.

“Room” is also special because the mother spends the first half of the film creating a loving environment for the boy despite their horrific conditions.  Her parenting skills and patience are a marvel. Then, it all changes for the better, as they desperately escape their claustrophobic nightmare, and enter the complicated world of freedom.

Despite it’s difficult premise, “Room” is a surprisingly watchable film.  Jacob Tremblay plays the young boy with such wide-eyed wonder he will touch your heart for all the right reasons. Joan Allen is quite good as the mother miraculously reunited with her daughter and grandson, and William H. Macy plays the father unable to wrap his head around what just happened.

“Room” is rated R and is skillfully directed by Irish film-maker, Lenny Abrahamson (Frank), and I admit the first half is difficult to watch, simply because we have seen monstrous stories like this played out on the news. But, there is also a sense of intimate grace and joy in getting to know this strong mother and her innocent son. Powerful, emotional, heartbreaking, authentic, honest, “Room,” is one of the best films of 2015.