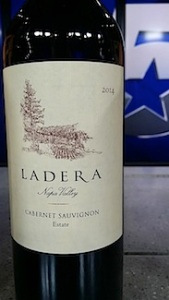 To pair, a wine inspired by Cheney’s ranching Wyoming roots, another rancher turned winemaker, Pat & Anne Stotesbery of Napa’s Ladera Vineyards, who sold their Montana ranch to dive full time into the world of wine twenty years ago.

And, as it is Christmas week, we offer a few pairings with our favorite holiday meals. More on these pairings can be found here.

To listen to the show, click here, or listen through your favorite podcast site, including Spotify, iTunes, IHeartRadio or Google Play. More on “Vice” from Gary below.

And, we teased our upcoming “Wine and Film, Perfect Pairing – Oscar Preview” event on this week’s show. Gary and I are excited to head back to Dallas for a special event with the Dallas Arboretum and Botanical Gardens, detailing the best films of the year, with Gary giving his picks for who the Academy Award winner will be. And, of course, we will pair key categories with delicious wines. More on the event, and to purchase tickets, here.

The more I think about “Vice” the better it gets because it took me a while to connect to the film’s odd style of storytelling, but ultimately it’s an Oscar-contending film of significant insight. A comedy one minute, a drama the next.

Christian Bale plays former Vice President, Dick Chaney, gaining 40 lbs to look and speak exactly like the former CEO of Haliburton who ended up being one of the most powerful men in America. Cheney’s life has been a wild ride of business and politics that included multiple heart attacks, a hunting accident with a shotgun, and a Vice Presidency that yielded more power than anyone to ever hold the office.

At this point, I should point out that “Vice” is not a valentine to Chaney or his wife, played equally well by Amy Adams. It’s a searing look at what happens behind the scenes of power of moving up the political ladder and the decision-making process that can be selfish and unethical. In this film, Chaney evolves to power by listening and quietly invoking his will on others, all the time being driven by his wife, Lynne Chaney.

Director Adam McKay(The Big Short, Anchorman) knows exactly what he is doing, using asides and narration to point out the gory details of manipulative power grabs in dirty politics, and it’s brilliantly funny. But alas, comedy turns to drama and what made me laugh eventually made me cringe, and it should.

I can’t honestly tell you everything that happens in this movie happened in real life, but statistics don’t lie and the film is filled with jarring examples of power out of control and unchecked.

“Vice” has moments of greatness and is ultimately a sobering film with excellent work by Steven Carell (Beautiful Boy) as warmongering Donald Rumsfeld, and Tyler Perry (Madea) as Colin Powell. it’s a challenging, well-made film, and I’ll watch it again.