This week’s “Cogill Wine & Film, A Perfect Pairing” Podcast on reVolver Podcasts Gary and I dive into the brilliance of Terrence Malick with his new Austin. TX based film, “Song To Song.” To toast this Texas film, a Texas winery with over 40 years of history, Fall Creek Vineyards. More on both below.

Listen to the show here and click “Episode 41.” And be sure to subscribe through iTunes, Spotify, IHeartRadio and Google Play.

The Film: “Song To Song”

Let’s get one thing straight. I am a big Terrence Malick fan. I have never met him, I wouldn’t recognize him on the street, and I’m always excited when I get the chance to see one of his films (Badlands, Days of Heaven, Tree of Life).

I also confess I see most of his works alone because they are far out of the mainstream and require both patience and plenty of attention from the audience.

“Song To Song” is such a film that uses the famous music scene in Austin, Texas as a backdrop for introspective melodrama.

Rooney Mara plays an insecure young artist looking for love and admiration while Michael Fassbender plays an arrogant, highly successful music producer looking for love in all the wrong places. Natalie Portman plays a sad eyed waitress open for seduction, and Ryan Gosling is a struggling songwriter looking for a short cut to success.

Everyone is looking for something in Malicks new film and when they find it there is a good chance it’s going to go wrong.

“Song To Song” also features Cate Blanchett, Val Kilmer, and Holly Hunter in fascinating supporting roles despite the film having very little structured narrative and not much dialogue. There is a lot of whispering and voice overs in Malick’s gut to the stomach, and I’m fine with the whole jumbled up mess.

It’s a movie of desperate people trying to get to the truth in hopes of finding a little comfort. Not unlike Paul Thomas Anderson’s emotional epic, “Magnolia,” this is a city of lost souls but not without hope. It’s also Austin, home of Linklater’s “Boyhood,” and Sandra Bullock.

So, once more into the movie breach I go, knowing full well that the genius of Terrence Malick is found in his ability to do whatever the hell he pleases. Yes, I find his movies rambling and frustrating but I also find them deeply spiritual and touching.

Even when I am the only one in the theater because the only other person walked out. 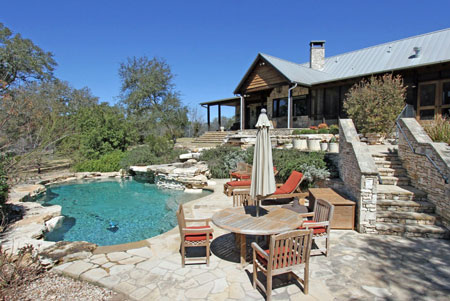 For this film shot on the streets of Austin, a wine from Austinites who created their Hill Country Winery over 40 years ago. After traveling to Bordeaux, tasting through the Chateaux of France in the early 1970’s Ed and Susan Auler returned to their Austin, Texas home with the goal to make great Bordeaux style wines in Texas. The began their winery, Fall Creek Vineyards, in 1975, creating it’s home about 20 minutes outside of Austin in Tow. 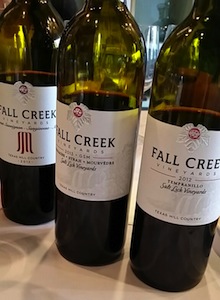 A few years ago they opened a second tasting room in Driftwood, and brought in a new winemaker, Chilean-born and raised, Sergio Caudra, recommend to the Aulers by friend, famed winemaker Paul Hobbs. Caudra has a philosophy he brings to the winery that anything can grow anywhere.

Though many winemakers take the stance that Texas does best with traditionally warm weather varieties, like those of Italy and Spain, Caudra spent a good deal of time researching Texas summers. In Texas there is a long lead time up to the hottest part of summer, with temperatures starting to rise as early as late spring, allowing grapes time to prepare for the hottest part of the year.

These constant high temperatures, with the proper amount of lead up time, allows fruit to remain healthy, ripening slowly while maintaining acidity. He began to understand how adaptable the vines can be, producing varietally correct, high-quality grapes for wine. Specifically, just because a variety like Rielsing is known to thrive in cool climates doesn’t mean it can’t also thrive in hot conditions. But, the flavors and textures may be different than we typically thing.

The Fall Creek Terroir Reflection Series wines are created to showcase the straight forward image of the place in each of their wines, including a Tempranillo and GSM. Their Fall Creek Vineyards Meritus is their classic, signature Bordeaux-style blend of Merlot and Cabernet Sauvignon, aged 20 months in oak.