This week’s reVolver Podcast Gary and I paired new releases with New and Old World wines. Last Friday we told you a little about “Cafe Society,” Woody Allen’s new film, pairied perfectly with Old World wines from Spain that are a part of Grandes Pagos de Espana. Old World wines with a legendary director.

In part two of our “Wine and Film, A Perfect Pairing” podcast we discover a little more about wines from the New World, Walla Walla in particular, with an out of this world film, “Star Trek Beyond.” Both to be enjoyed and celebrated this summer season. The show is linked here, click “episode 5.”

A little more about our pairings below. Cheers!

The Film: “Star Trek Beyond”

“Star Trek Beyond,” is an enjoyable, better than average, examination of friendship and hope disguised in the framework of an action sci-fi film. It plays like a charming “old school” episode rather than an edgy overblown feature, and I continue to feel safe and secure with these actors playing characters that have been with me most of my adult life.

Chris Pine, Zachary Quinto, Zoe Saldana, Karl Urban, John Cho, Simon Pegg, and the late Anton Yelchin are all present and paired up in bunches to fight the good fight against a heavily-masked, Idris Elba (Krall), who has gone to the dark side for personal and professional reasons.

There is a sense of recognizable sadness watching Yelchin work in the background of Kirk, Bones, and Spock, and there is a genuine sense of melancholy knowing Leonard Nimoy recently passed in 2015.

Director Justin Lin (Fast & Furious 3-6), is a self-professed “Star Trek” fan and his film sends a much more positive message out to the universe rather than a message of anger and doom.

Lin’s movie would not have made the cut at the recent GOP convention.

That’s not to say “Star Trek Beyond” doesn’t have problems, beginning with a confusing story line, plenty of running down hallways firing phasers, some weird science, and a bad guy that makes sense to himself but not to the audience.

“Star Trek Beyond” is also a model of diversity in Hollywood, because in the Star Trek universe men and women’s roles appear interchangeable alongside color, sexual orientation, or creature design. Similar to the “Star Wars” universe in that certain film makers have finally figured out, “all white is not always right.”

“Star Trek Beyond” is rated a mild PG-13 and feels more introspective than the title implies. It’s good but not great, enjoyable and never cynical, good triumphs over evil, and by the time I got in my car I felt as if the universe was in good hands.

I recently returned from a trip to Walla Walla, WA traveling as a guest of the Walla Walla Wine Aliance as well. One of our youngest wine regions in the states, with the first producers (including the first with Gary Figgin’s Leonetti, and his California Army Reserve buddy, Rick Small, who started Woodward Canyon, both believing the wines should be made in the vineyards, which in the late 1970’s and early 1980’s was a new way of thinking. At the time, winemaking in America was fully utilizing the many tools available to “help” were readily available to many winemakers. Believing that wine is made in the vineyard is a way of life now, and these vineyards are stellar.  Volcanic soils, marine sedimentary soils, as the region was once under water, and runoff from the Missoula Floods creates distinct soils, mineral intense yet incredibly nutrient poor soils, ideal for vineyards.

The main problem in the arid, dry region has always been water. If a vineyard could get water rights approved, the likelihood of creating a successful vineyard multiplied immensely, as the soils are made for growing great vines. Today, as more and more farmers are transforming their land from wheat farms or apple orchards, two of the largest crops for the region previously, water becomes more available (it takes a fraction of water to grow vines vs. apples…no dry farming here….too hot in summer.)

New district – “The Rocks District of Milton-Freewater” actually looks very similar to some of the Numanthia vineyards in Spain, or the terraced vineyards of the Douro in Portugal, or the vineyards of the Rhone, which was the inspiration for Cayuse to plant so much Syrah in their vineyards, dubbed “Oregon’s Châteuneuf-du-Pape.”

Walla Walla, and Washington as a whole, has always been a place that if you had the desire and the dream, you could make it happen, so it is a place built on passion where you can create your own destiny.

Over 30 years ago Leonetti joined with L’Ecole No 41 and Pepper Bridge to plant their famed Seven Hills Vineyard, considered one of the premier growing sites in Washington, with clearly identifiable tastes produced in their fruit. Wines are filled with structure, texture, balance and beautiful elegance melding with robust, ripe power, particularly in their Cabernet Sauvignon wines. 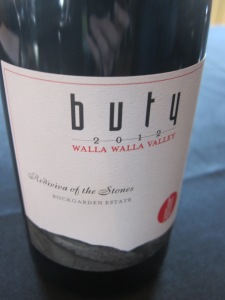 Whether you are a farmer, a construction worker, a brewer or an ex-fighter pilot like the founders of my favorite new find, Aluve, and Buty, founded by Seattle native Nina Buty in 2000 who fell in love with the peace, the beauty and the Walla Walla atmosphere, and knew this was the ideal place for great wine in America.