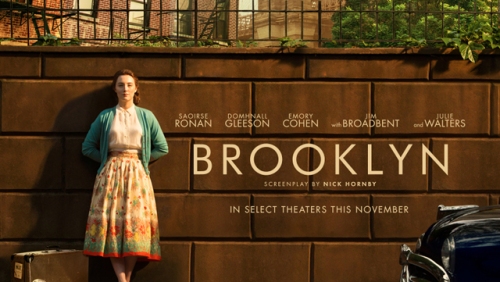 “Brooklyn” is a film of profound, simple beauty about a young woman who immigrates from Ireland in the 1950’s and finds herself sad and scared to leave, but open minded about her new life in America. Saoirse Ronan is Oscar-caliber, playing the wide-eyed, soft-spoken lass who meets an Italian boy named Tony.

Tony is well played by, Emory Coen, and their friendship quickly turns into a loving, respectful romance that helps heal her homesickness. Their relationship is a rare gem in modern films because it’s not about deception or conflict, it’s a relationship based on genuine affection and mutual respect.

“Brooklyn is directed with a delicate touch by Irish director, John Crowley, and features a delightful performance by, Julie Walters, as the wise and witty boarding house owner who has seen it all, and is hard to fool. Domhnall Gleeson plays the charming Irish lad who does his best to woo back the impressionable young girl.

“Brooklyn” runs just under two hours and is rated PG-13. Every frame of this understated film reflects the thoughts and concerns of its lead character. Saoirse Ronan lights up the screen in a deliberately subtle, old fashioned way. It’s one of the best performances of the year in one of the best films of the year.